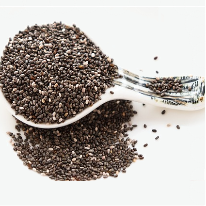 My first extended fast, I broke cautiously and everything was fine.

My second extended fast, the decision to break was more abrupt, so figuring I had an iron stomach, just ate. Turns out this was a bad call.

I spent many hours in pain, burning through my gut, and running to the john.

I figured I’d been rather stupid and need to break extended fasts more sensibly. Fung has recommended chia seeds, so I began there.

I posted about this on the ELAB group:

Some folks coming off an extended fast have GI issues.

My first fast, I was very cautious. I had bone broth and a half pack of sugar-free jello, waited a few hours, then had the rest of the jello before eating some eggs.

My second fast, I threw caution to the wind, ate some sausage and eggs right off the bat, and spent several hours cramping in pain, and much time on the john that evening.

Normally, when you eat, your stomach has a whole bunch of strong acid that starts to digest food, then the food moves into the small intestine where it gets hit with pancreatic juice, which includes a lot of bicarbonate to buffer down the acid of the stomach. You don’t want the stuff entering your GI tract to burn you; the stomach is built to handle a lot of acid, but the rest of you is not.

The pancreatic juice also contains enzymes to further break down your food, amylases which digest carbohydrates, proteases which digest proteins and lipases which digest fat. Basically, this juice does most of the digesting of food, extracting useful nutrients, and passing on what is less useful in a benign fashion for your gut microbiome to feed on.

As far as I can tell, when you don’t eat for a few days, the pancreas gets lazy. It’s “not ready,” if you put a bunch of food in there suddenly. As it happens, jello is solid enough to wake the pancreas up, but easy enough to be digested without the full dose of pancreatic juice.

But a bunch of undigested food in acid flowing through your system is damned unpleasant. When I tried to eat with an unprepared pancreas, it hurt rather a lot. So… don’t do that. I had gotten in the habit of eating jello while preparing my meal, and for me, that’s been enough to prevent further problems.

On the other hand, I’m not terrifically fond of jello, and aside from some gelatin which is good, the flavored boxed stuff is full of chemicals I don’t consider real food. It’s OK now and then, I’m not a food purist, but given I’m fasting pretty much every week, I wanted something better.

Dr. Fung says to break a fast with soaked chia seeds. Now that’s fine and dandy for him to say, and I realize chia seeds have become somewhat of a trend lately, but I’ve never had any desire to eat them. To me, chia seeds are things you spread on a pet-shaped clay mold “as seen on TV,” not food.

But this week, I gave it a try. I had bought the smallest possible box of chia seeds, in case I didn’t like them, and made a chia pudding. I read a bunch of recipes and came up with my own adaptation:

This makes 4 servings; I can’t be futzing with recipes that use less than an entire can of coconut milk. For those who care about macros, per serving:
4.6 net carbs
4.7 g fiber
5.4 g protein
6.0 g fat (and all healthy fat at that!)
112 calories

Where is the sweetener? There isn’t any. Coconut milk is already sweet, that being where most of the carbs are coming from. It’s “natural sugar,” but it still counts; my bG doesn’t care whether I think the source of a sugar is healthy or not.

I personally think this is a minimal dose of carb for using real food instead of whatever is in that jello box. All of you have to choose for yourself, of course. It has both carbs and calories on top of your ordinary meal, whereas sugar-free jello has neither carbs nor calories, so you may not value this the same way I do.

Most importantly, it worked; eating about a quarter of the bowl while I was chopping vegetables woke up my pancreas enough to avoid any problems. That being the entire point, as I’d not be making chia pudding for any other purpose!

And chia seeds are no longer intimidating to me; this stuff was pretty yummy. It’s not the most delicious thing I ever ate, it doesn’t beat creme brulee, but it’s a good bit nicer than a box of jello.

Along similar lines, when breaking the daily fast on OMAD days, I drink a cup of bone broth while preparing my RBS.