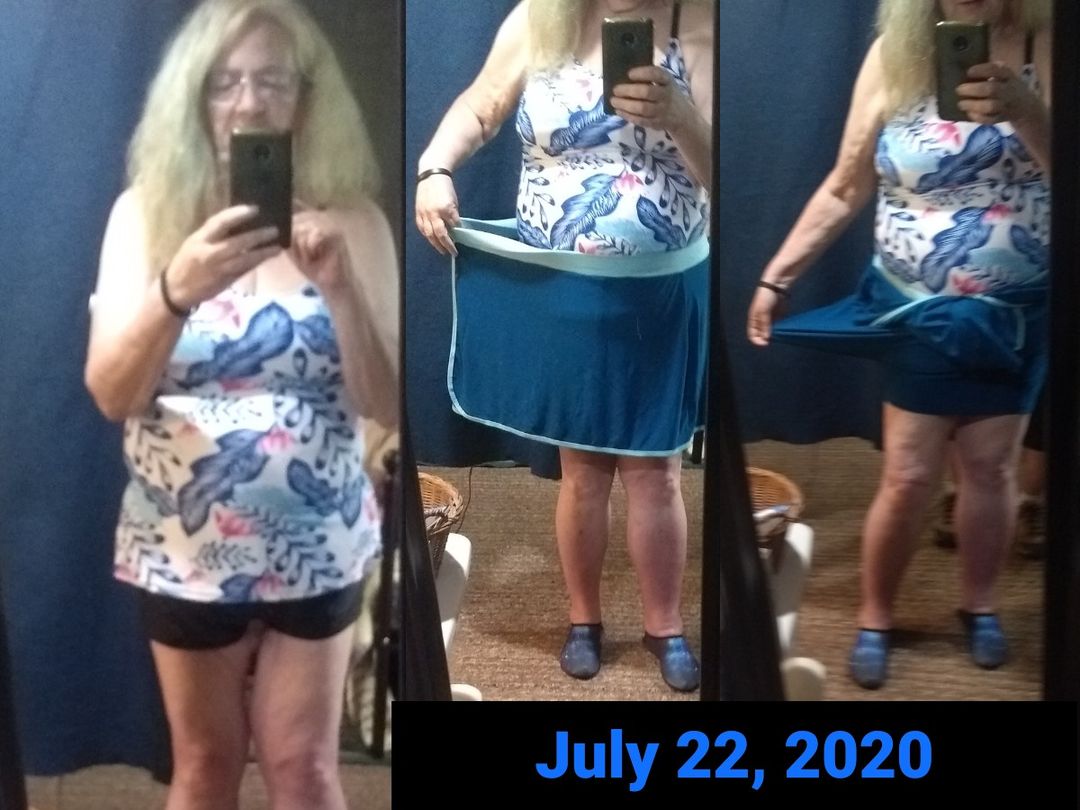 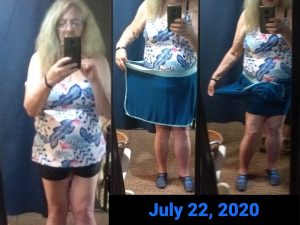 I did post these pics before, but was being a bit chicken and posted them as a comment in the ELAB group, not as their own post and certainly not out here in public. I’m even camera-shy when I take pictures *intended* to be posted!

So here’s the back story; I had a planned kayaking adventure with Jeanne Griswold and Maria De Jesus Bass, and had the sudden realization that none of the clothes I currently own would work. I can walk or garden in them, but needed something that would not fall off when being active.

Heck, even my shirts slide down my shoulder, exposing half my bra. Can’t be hiking up my shorts while trying to move.

I had no idea what size I was. For decades, I’ve only bought stuff in either 3x, or when I was down in weight, in 2x. I took some measurements and bought this suit, in a size 12-14, which struck me as totally crazy.

Denise Lindsey was here when it arrived, and I opened it and was immediately disappointed. There’s NO way this teeny, tiny suit will go on *my* body. She encouraged me to try it on anyway. She’s been a great cheerleader in my journey and swears I’ve lost more than the scale says; she says I don’t know how small I’ve gotten.

Denise went to pull out my old bathing suit to toss, and was startled, so held it up for me to look at. It was HUGE. So this seemed the perfect time for a picture! I put the bottom on over my new suit and held it out to show how big it was. Here’s the REAL kicker; I had both legs in *one* of the legs of the old suit!

I have to add, cause I can’t leave it out: I was a T2 diabetic for 30+ years, on insulin for 12+ of those years. I’m off all meds now, and my last A1c was 5.5%, out of both diabetic and prediabetic range. Many of the side effects of long-term diabetes have healed as well. *This* is the real victory, not that I’m becoming pretty; the pretty is just a nice side effect of my diabetes being in remission.

Don’t look at these pictures and just see that I’ve lost weight; I accomplished MUCH more than that: I lost diabetes!

my one year testimony

one year in: smaller than I was in college!